Grey Heron with chick under its wing 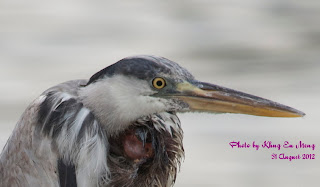 On the morning of 31 August 2012, while strolling along the track in the Lorong Halus Wetland, I passed by the usual suspects of Grey Herons (Ardea cinerea), which always park themselves on the buoys in the Serangoon Reservoir. But I noticed that one of them was standing closer to the bank, which wasn't a usual thing to do. So I decided to take some photos of it as it was within my lens' range.

Through the camera view finder I noted a pinkish blob under the bird's neck and slightly to the left of its chest. I thought it had suffered a flesh injury from a fight with another heron. It frequently bent its head to stroke the pink flesh.

Upon blowing up the picture on my notebook, I saw that there was a tiny beak poking out from where the pinkish flesh was. I was blown off my seat as it was a very young almost featherless chick that was tucked under the parent's wing.

Is this method of caring for its young usual for Grey Herons? I always saw the nestlings in their tree-top twigs nests in the Pasir Ris Park, so this was a surprise. Interestingly, when the adult flew off, the chick didn't fall out. How was this possible?

On behalf of the National Library Board (NLB), we would like to invite you to pledge your blog to the Singapore Memory Project as part of efforts to collect memories that are already manifested in existing online channels.

The Singapore Memory Project (SMP) is a national initiative to collect, preserve and provide access to Singapore’s knowledge materials. Spearheaded by NLB, the SMP aims to build a national collection of content in diverse formats (including print, audio and video), to preserve them in digital form, and make them available for discovery and research.

By pledging your blog to SMP, you are affirming that every memory matters. Whether your posts are an account of your daily life, or an expression of your thoughts, the SMP hopes to find a home for your memories so that it can help build towards an understanding of Singapore. You will also receive a badge that you can display on your blog in recognition of your contributions.

Contributors to this blog pledging initiative will be listed on Singapore Memory portal’s blog pledging webpage. All blogs pledged to SMP will archived using NLB’s web harvesting software, in addition to images of each blog’s landing page.

If you are keen to pledge your blog to SMP, simply fill up our response form at this following URL: http://singaporememory.simulation.com.sg/Public/Pledge.

You may find out more about this initiative at http://www.iremember.sg/?page_id=2822.

We are looking forward to your contribution.