The Environs of Sengkang and Punggol

As my ears become more sensitised to bird calls, I notice that beyond the cackles of mynahs and cawings of crows, the sharp tweets of sunbirds are often heard. Trees with flowers are especially well visited by these sunbirds, most of them the olive-backed ones. Here's a male on a twig. 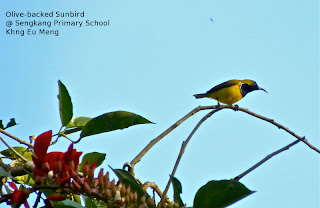 The Paddyfield Pipits are still fattening up in the open fields. 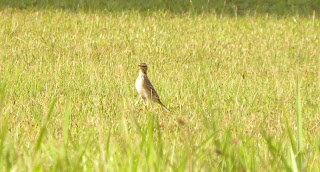 The Koel hasn't come to Sengkang to de-populate the House Crows yet, and the latter are now very much everywhere. 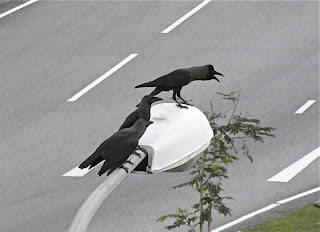 
While taking a stroll this evening, I spotted a flock of very hoppity birds in the large fields, foraging for their supper. They were Paddyfield Pipits. 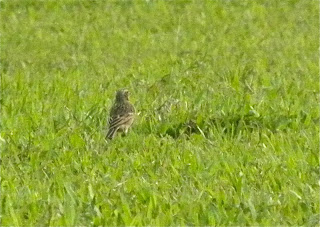 
Owing to the current transformation of the seafront off Punggol End into marina, the previously lush secondary forests have largely being cleared off. But to the left side of Punggol Road, near the Outward Bound School building, there is a clump of tall trees. And it is here that there is still some bird life left.

The familiar bird calls of the Kingfisher, Koel, Mynah, Green Pigeon, Dove and Sparrow plus a couple of calls that I can't quite identify, were heard. Spotted Doves and Peaceful Doves feed on the ground and in the trees. 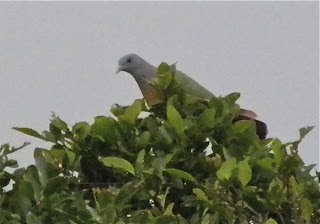 Standing fairly still on the TV antennae of the residential homes were a collection of Starling, Mynah, Dove and a solitary Blue-tailed Bee-eater. 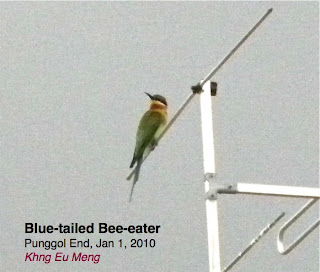 However, there was a treat in store for me. While trying to photograph the Green Pigeons, I spotted a black bird among the branches and it turned out to be the Koel, whose call I had been hearing all along. 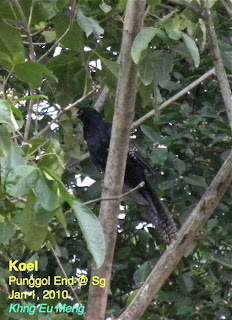 Spied from my Window/Balcony in Sengkang

At 8 a.m. I was woken up by the piercingly-clear calls of the golden yellow Black-naped Oriole. It had been challenging trying to see this bird much less capture it with my camera. Having a bird's eye view from my mid-level flat gave me the opportunity to see it without giving it the frights.

Here's a photograph of the back of this lovely bird feeding on the nectar and pollen of this flowering tree. 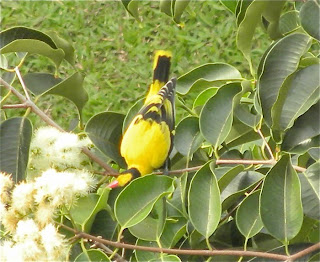 Hopping about within the same tree was a small flock of Asian Glossy Starling, with its shimmering blackish-green feathers and intimidating red eyes. I have seen these at the Botanic Gardens and at Bukit Timah but they were too high up in the trees making it hard to view them. Here, a member of the flock was feasting on what the blossoms provided without knowing that I was photographing it breakfasting. 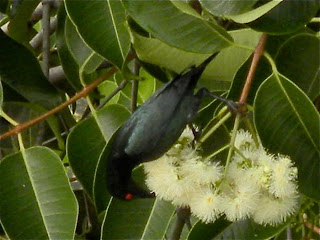