Watercock
This one's female but it's not called a Waterhen


THE birders' forum was abuzz earlier this week with a new sighting of a rarely-seen bird, a Watercock (Gallicrex cinerea), in Singapore.

The water fowl was spotted at the Eco Park within the Singapore Botanic Gardens.
Wikipedia says it is a "waterbird in the rail and crake family Rallidae.  It is the only member of the genus Gallicrex.


"Their breeding habitat is swamps across south Asia from India, Pakistan, and Sri Lanka to south China, Japan and Indonesia."

Despite being endemic to this region, knowledgeable birders say it is rarely seen here. The one in the photo is a non-breeding female.
The male "have mainly black-grey plumage with red legs, bill, forehead shield and horn.
"They nest in a dry location on the ground in marsh vegetation, laying 3-6 eggs. These large rails are mainly permanent residents throughout their range.
"The body of this rail is flattened laterally to allow easier passage through the reeds or undergrowth. It has long toes and a short tail.
"These birds probe with their bill in mud or shallow water, also picking up food by sight. They mainly eat insects and small fish and seeds. They forage on the ground.


"Watercock are quite secretive, but are sometimes seen out in the open. They are noisy birds, especially at dawn and dusk, with a loud, gulping call."
The Watercock was observed to want to stay and forage for food round a badelygne of Lesser Whistling Duck (Dendrocygna javanica), also known as Indian Whistling Duck (see footnote) and a pair of Black Swan. But it seems to be less tolerant of the common White-breasted Waterhen (Amaurornis phoenicurus) and would chase it away when it got too close.

I am glad this odd-looking bird adds to my list of lifers for this year.

Footnote: The Lesser Whistling Duck (photo below), also known as Indian Whistling Duck, is a small whistling duck which breeds in South Asia and southeast Asia. It may also be called the Lesser Whistling Teal (based on an older classification), or the Tree Duck. This duck is usually seen at the end of the year until the first few months of the new year. 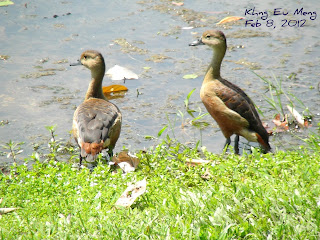