Couples
Love's in the air 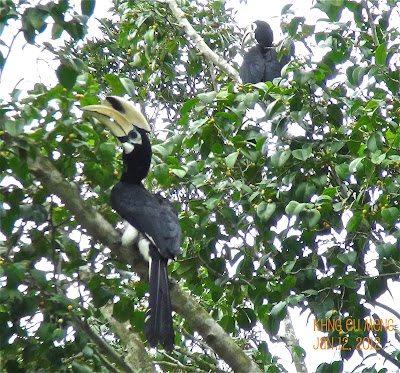 AT around noon, a pair of Oriental Pied Hornbill (Anthracoceros albbirostris) made their presence felt when they flew overhead with their distinctive steam locomotive sound as they flapped their wings (whoosh, whoosh). Quickly following the sound I soon spotted them, large as life and just about three metres up on a tree, feasting on red berries. In my excitement, I forgot to ID the tree.

This wasn't my first sighting of this hornbill specie (the first was at the Singapore Botanic Gardens, two years ago) but it was the first sighting of a pair - a male and female. I suspect they are a breeding pair as the larger male would occasionally offer a berry to the female and making soft calls to it. It was certainly a romantic sight.

What especially thrilled me was the birds' absence of fear of the few human beings who were around - roller bladers, courting couples and me with my camera pointed at them.

At one stage, the female flew to a nearby tree and I found myself standing between the two. They eyed me all the time, then the female turned its back to me while I happily snapped away. The male finally couldn't stand the separation any longer and flew to the tree where the female stood on. He flew low and close, he was a mere metre away from me. What a terrific experience it was to feel the wind as he flapped his broad wings as he flew passed.

Further up the path, a streak of brilliant turquoise blue suddenly zipped past. That could only mean one thing - there was a Collared Kingfisher (Todiramphus chloris) about.

But what I did not expect to see was a pair of them sitting on the same branch, some 20 metres away.

I can't be sure whether they were a courting couple but they certainly stood fairly close to each other for a good 10 minutes. Not a chirp was heard being exchanged though.

As I was about to leave the park, a solitary bird was busy hopping about, from vine to bench to grass. It was lunch time and it attacked the rich pickings of insects. It was a glossy black-topped and white-bellied bird, which turned out to be an Oriental Magpie Robin (Copsychus saularis, below). Again, this bird showed no fear of me and once hopped within three metres from my feet. 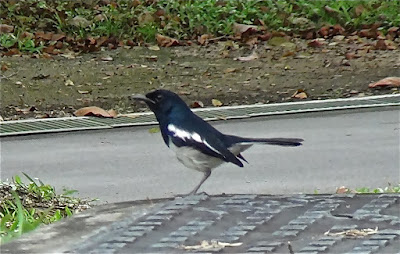 Once again, Pasir Ris Park proved to be a really good place for bird watching, you just need a dose of patience and the birds will show themselves and perform for you.

beautiful shot of Hornbill and the KF. Now, You enjoy birding and photography very much.

Thank you for the comment. I have few pleasures in life, but this is definitely one of them, and I guess practice makes me better. Not all photos are great, though.