Two years ago, when the Lorong Halus Wetlands (http://www.streetdirectory.com/asia_travel/travel/travel_id_54360/travel_site_1/), formerly a landfill in a swampy area, was officially opened by the pristinely landscaped banks of the Serangoon River, it was already well known for its bird life. Today, I am happy to blog that birdlife is not only healthy but in such numbers and diversity as to make a birder's heart thump with joy.

Of course, it is no walk-in-the-park in getting the birds to stay still long enough for one to take shots, but sometimes one can be fortunate. But anyone with a good pair of binoculars can see these birds in the bushes and trees.

Over the past two months, I managed to capture on camera a number of birds, which I am sharing here. Many are lifers. Unfortunately, not all shots are good, owing to poor shooting technique, cameras and light conditions but the birds were mostly clearly captured. 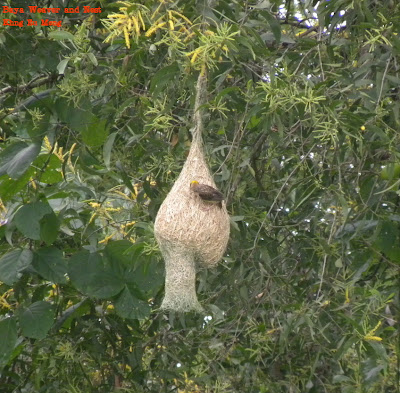 At the entrance to the park, several large lantern-like nests hang from the trees (above). These are simply stunning to look at. They are made by the talented Baya Weaver bird (Ploceus philippinus). Apparently, the male are the architects and the usually drab bird grows a golden crop of head feathers during the breeding season (December to March). They tend to nest in flocks and the males are promiscuous.

At Halus, puddles of fresh water and the heat wave attract the weaver birds and other small birds, such as the Golden-backed Weaver (Ploceus jacksoni), Common Waxbill (Estrilda astrild), a passerine finch from the sub-Saharan region and introduced here, Orange-cheeked Waxbill (Estrilda melpoda) from western and central Africa, and several kinds of munias - Chestnut, Scaly-breasted and White-headed. Here are some group photos of the birds bathing together. 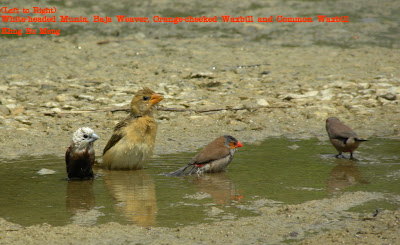 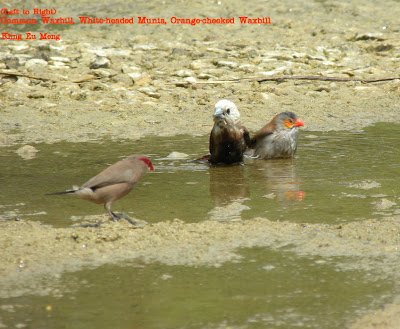 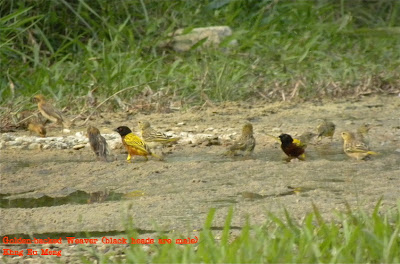 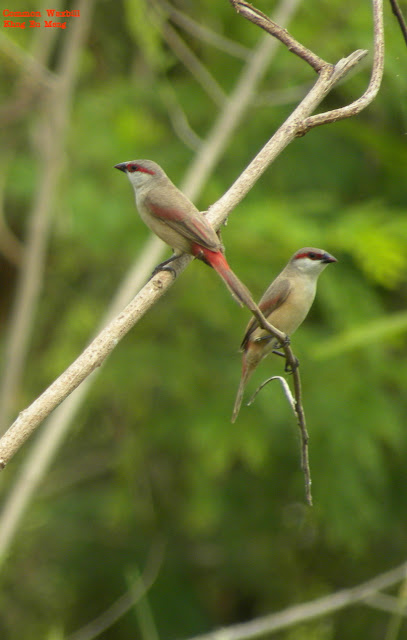 Some weeks ago, there was a buzz in the birding circle that the Rusty-breasted Cuckoo (Cacomantis sepulcralis virescens), below, were spotted in Halus. This is a lowland bird and is endemic to Singapore. A very nice lifer, thank you. 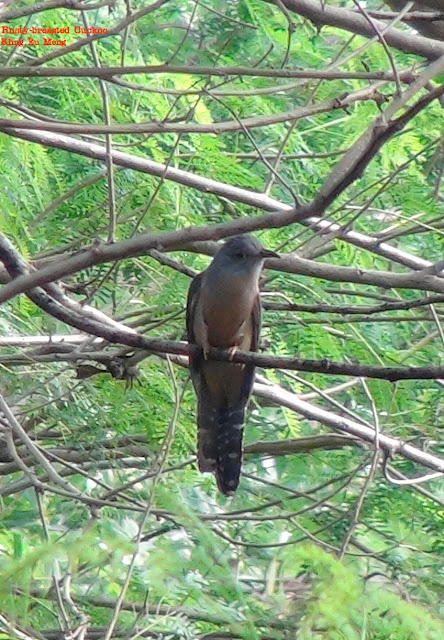 Another lifer for me, a seldom seen bird, is the Little Bronze Cuckoo (Chrysococcyx minutillius), below. The little bird is the world's smallest cuckoo in the Cuculidae family. It weighs just 17 gm and is 15 cm long. 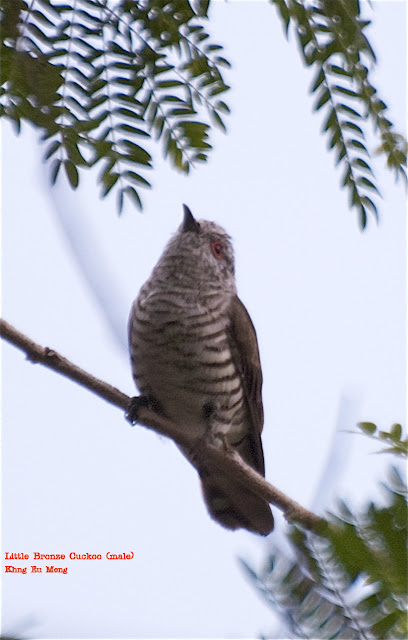 For weeks, I had wanted to photograph the Blue-throated Bee-eater (Merops viridis), below. They were always too far away or flew off before I could focus my camera on it. One morning, as I was driving out of the park, I suddenly spied the familiar shape perching on a low branch by the roadside. It also made several spectacular aerial flights to catch its breakfast of insects. Staying in the car I managed to drive close to it and snapped some photos (below). The gray sky didn't help to produce great photos, unfortunately. 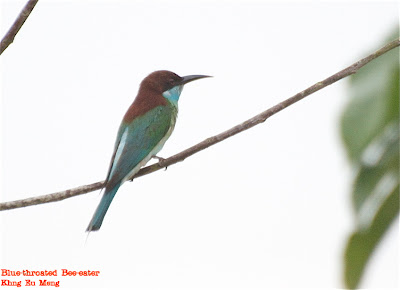 Interestingly, this bird breeds in Singapore from April to September, then flies off to Indonesia. The Blue-tailed Bee-eater then flies into Singapore.

One bird, who I will not fail to see whenever I drive to Halus is the White-throated Kingfisher (Halcyon smymensis), below. A rather large bird (up to 28 cm in length), it's bright turquoise, brown and white feathers and very prominent red beak makes it stand out from afar. There are four of them in the area and they like standing on the road railings. They would make sudden take-offs to catch prey in the grass, canal and trees. 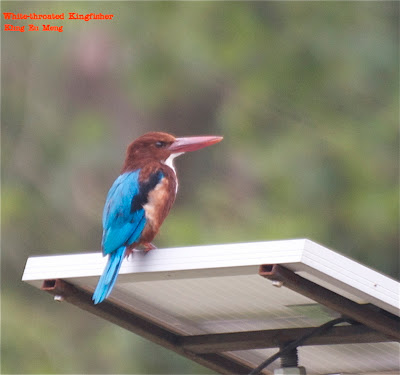 A shy bird that often hides among the reeds is the Yellow-bellied Prinia (Prinia flaviventris), below. You would hear its call but not see it. It does respond to calls but will still not come right into the open. 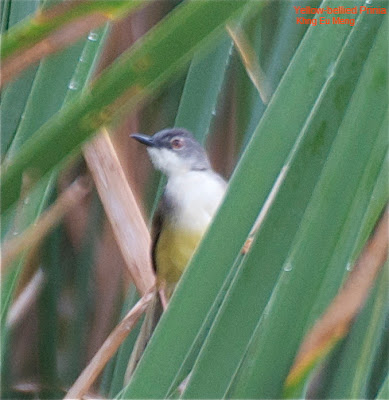 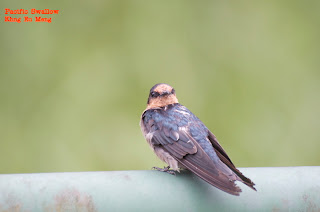 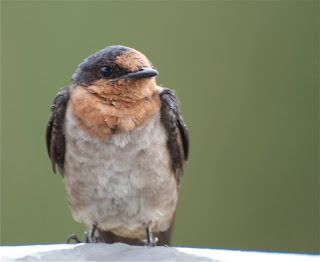 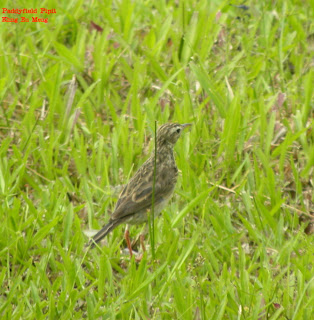 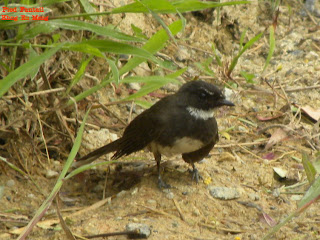 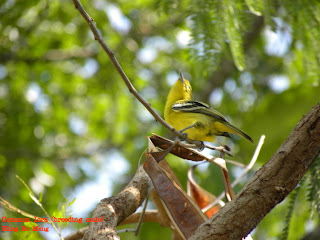 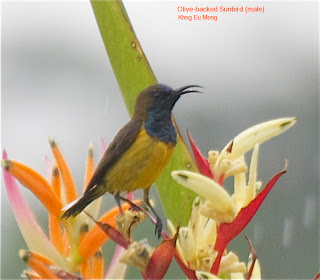 beautiful waxbills, which I havent seen before, are they the introduced species?

it's a nicely written blog!

it's a nicely written blog!

All Wild, if you read the blog you would learn where the Waxbill birds are from - from Africa. They were said to have been exported here for release by Buddhists on Vesak Day. Thanks for visiting.

Chong Lip, thank you for appreciating it.

I have never seen Yellow-bellied Prinia at Lor Halus. Where exactly did u see it?
And the white-throated kingfisher, u said u always see it at the road railings. which road railings are u referring. I have yet to take a closer up of this bird and wish to do so. Thank you.
ST