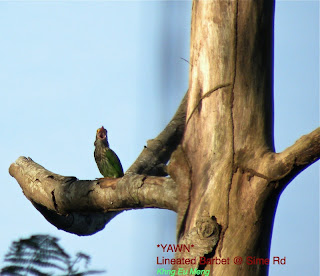 I went back for more, even if was for the same. But I know I would at least pick out a few others that I missed seeing yesterday morning.

This time I arrived just after 7 a.m. and the dew was still heavy in the air. Bird song was just starting and I had time to survey this stretch of Sime Road.

In the far distance on the trunk of a dead tree, a Common Flameback Woodpecker (photo below) was busily pecking for grub. No "tock tock" sound as you would hear in Woody's cartoons. 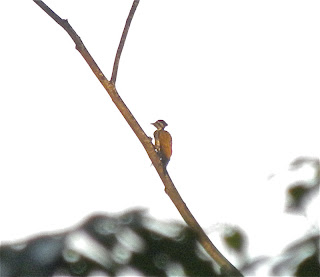 As the first sun rays hit the top of the trees, several birds had stationed themselves on bare branches to warm up their bodies made cold over the night. Here, a Yellow-naped Oriole took the opportunity to groom its flight feathers (photo below): 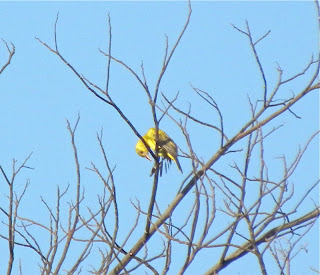 Over at the next tree, a trio of (clockwise from centre) Little Green Pigeon (lifer), Pink-necked Green Pigeon and Lineated Barbet, shared the space harmoniously (photo below): 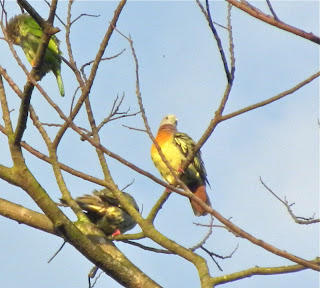 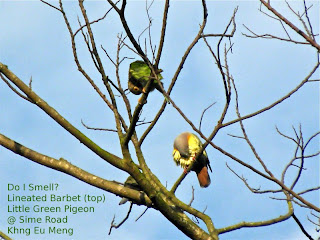 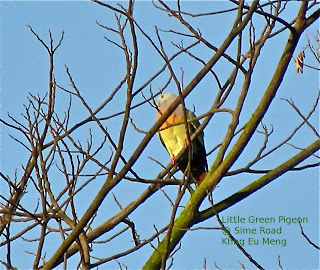 I saw my lifer of yesterday, the Lineated Barbet, this time with a pal in tow. Here are photos showing its early morning routine of sunning and eating: 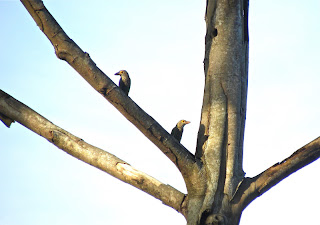 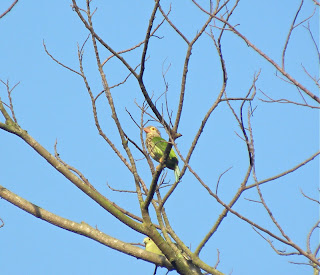 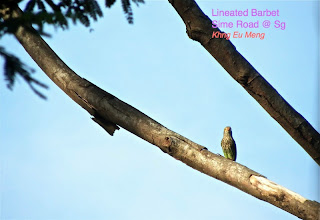 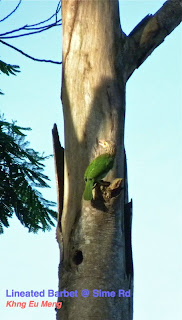 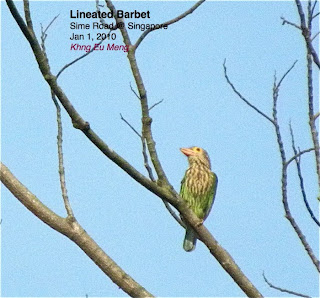 
Sime Road, leading in from Lornie Road, is full of bird life between 7 a.m. and 9 a.m. There are few houses around as the road skirts an old Chinese cemetery on Bukit Brown (Bukit means hill in Malay). There are many flowering and fruiting trees in the area. It's truly a sanctuary for birds and I hope it stays this way for some time to come. But I fear it may not be too far off when these graves are exhumed by the government and the land given over for development.

First stop was a quiet lane within the cemetery, populated with one hut and some dogs, which barked non-stop at my intrusion into their space. To my untrained ears, the many new bird calls tell me there are many birds which I have probably never set eyes on before. Compounded by the flitting and flying of our feathered friends my eyes didn't quite know where to focus. But on some bare tree branches far away sat some birds and through the binoculars I made them out to be the Long-tailed Parakeet (photo below), a lifer for me. 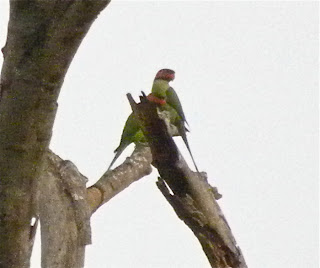 Not wishing to dare the dogs to take a bite at me, I headed out to Sime Road. Which, to my surprise, was also full of bird life. I noticed a green bird eyeing me from a bare tree branch. Using my binoculars, I recognised its shape and colour but not its markings. I felt pretty sure that this was a Barbet. "A Field Guide to the Birds of South-East Asia" (Craig Robson), tells me that this was the Lineated Barbet (photo at top and below; and a lifer for me): 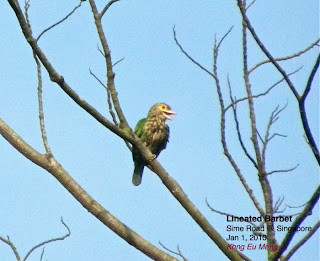 The flutter of Green Pigeons was everywhere; I mainly saw the Pink-necked ones and there were others which I couldn't identify as to my untrained eye, they look so alike. 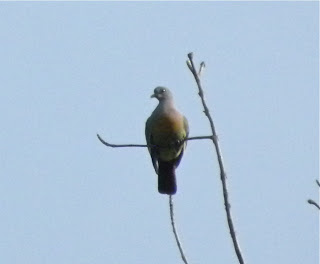 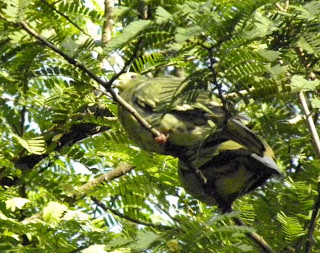 The omnipresent Javan Mynah, I largely ignored, but there was one drinking its morning juice from an African Tulip (photo below).

Further away, a medium-sized bird was following my movement. It was a cuckoo, and another lifer for me. We exchanged stares for quite a while and then it flew off when I wanted to take a closer shot at it. I believe this is an Indian Cuckoo, given its brown head and throat (photo below): 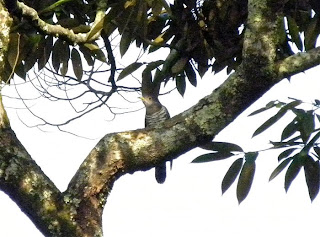 Birds seem to like standing on bare branches while soaking up the early morning sun rays to warm up their bodies. These birds - a Dollar Bird (left) and a Greater Racquet-tailed Drongo (right) were seen at some distance off (photo below): 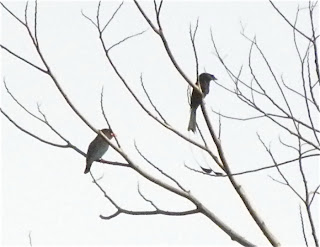 Last but not least, the elusive White-collared Kingfisher, whose call is everywhere but not that easy to spot, was seen standing on a branch within a tree (photo below) just before I headed home for my breakfast: 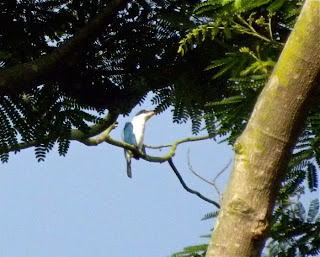 Not bad for an hour and a half.