This post is dedicated to various authorities in Singapore, especially NParks, and other nature groups such as the Singapore Nature Society, who have chipped in to protect many of our birds from poachers, and for the banning the use of air guns and catapults. As a result, we today are able to enjoy the sight and songs of these feathered friends all over our islands.


What a hoot it was when I made two short trips to revisit the Botanic Gardens on 15 and 16 January. I saw several lifers the moment I arrived, through advice given by fellow birders who were at the gardens. First was the Tiger Shrike, a juvenile judging by the absence of the black eye band. 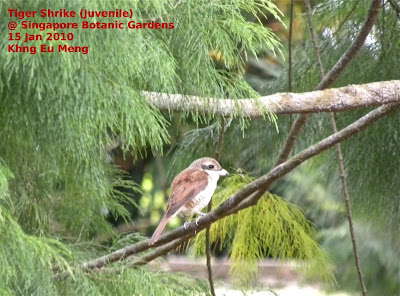 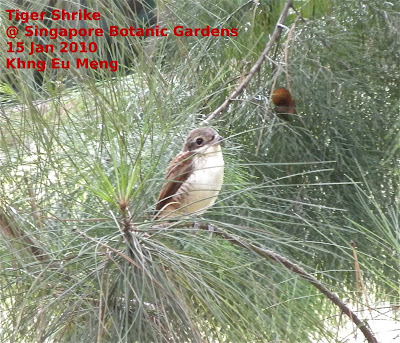 Wandering towards the Eco-Park area, I thought I spied another Tiger Shrike because of the stripes of the small bird. It turned out to be Sundar Pygmy Woodpecker, my second lifer for the day. 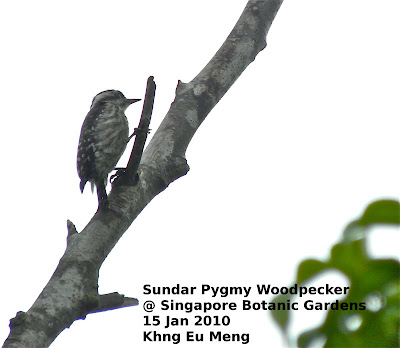 Foraging in the same tree as the woodpecker and in the adjoining palm oil trees, which were fruiting, were many gregarious Long-tailed Parakeet. 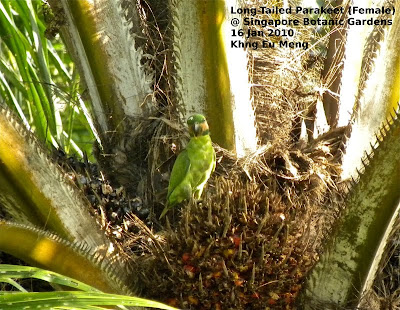 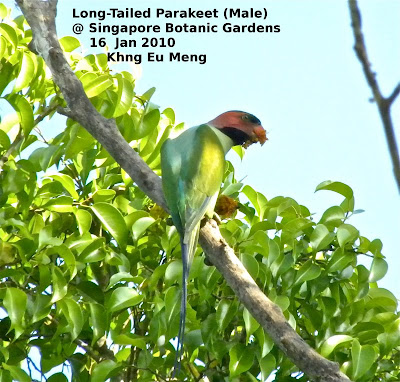 Making one last round the gardens before evening fell, a fellow birder was seen squatting among a stretch of shrubbery. He said there was a Malayan Night Heron (MNH) around. Then I spotted it, a juvenile and quite unafraid of humans. I had seen many of these night herons in Taiwan but never here. 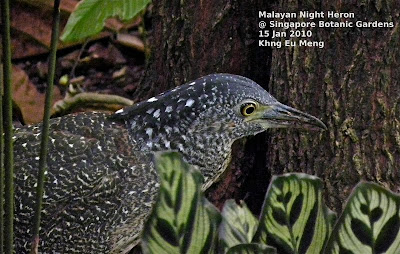 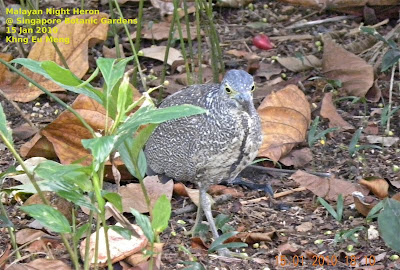 Of course, what is visiting the Botanic Gardens without seeing the Black Swan? So here it is in all its glossy black glory. 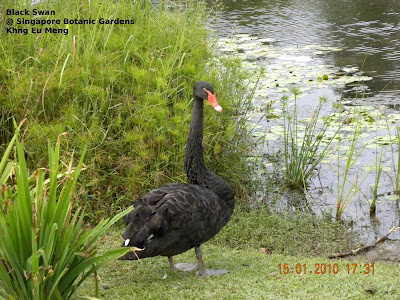 The next morning, upon entering the back part of the gardens, my attention was drawn to another lifer: Red-Legged Crake. It was foraging for breakfast underneath some bushes and one could have missed it completely were it not for a helpful fellow birder. 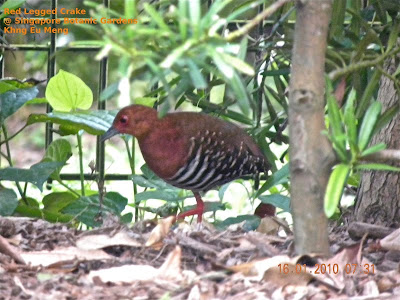 Then rounding the corner a rather peculiar block of stone stood out among a pile of rocks, in the sense it was not of the same gray-green colours. This one was rather brownish-black. Through my binoculars, it turned out to be my second lifer for the morning, a Large-Tailed Nightjar. Here's its front view: 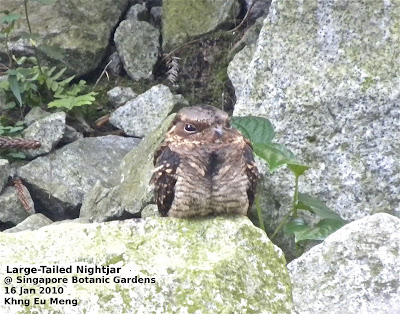 And its side profile with eyes trying to keep awake because of my presence, poor thing. I hurried away after taking this shot, of course. 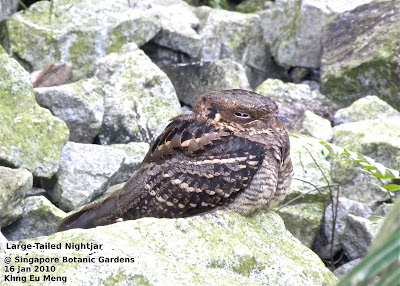 Lovely bird songs filled the morning air as a group of Oriental Magpie Robin hopped among some bushes and at the bottom of trees. They look black from afar but actually have some Prussian blue feathers in the head and top of the wings. 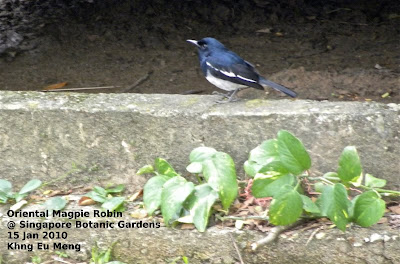 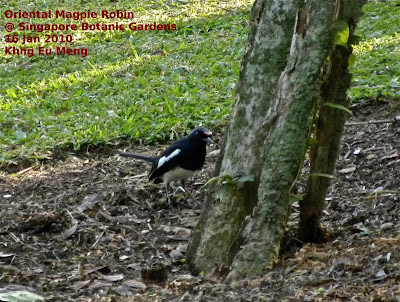 This time round the only kingfisher spotted with some regularity was the White-Collared. 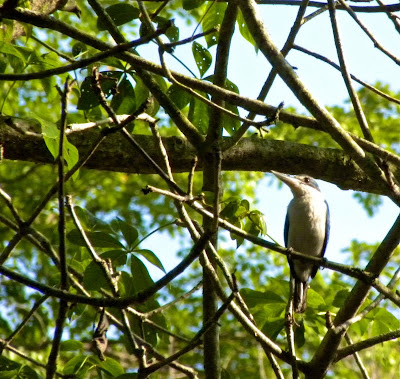 One lifer that I failed to photograph, because it just won't sit still long enough for me to find it on my camera, was the Asian Brown Flycatcher, which to the casual eye resembles a sparrow.

Some birders have had very good trips to this park, but my first visit there almost ended without seeing anything new or familiar other than the odd Olive-Backed Sunbird. But high up under the canopy of some trees were a noisy bunch of birds, which through the binoculars, indicated that these were a lifer for me. But it was too dark to take any shots. I believe they were some kind of Babbler Tits. But while walking back to the carpark, on top of a bare tree branch stood a bird with a parakeet silhouette. It turned out to be a Red-Breasted Parakeet (lifer!). Patience paid off, as it was soon joined by four others. It looked like they were a family, as the one perched on the top began to feed one of the flock that joined it. This made for several wonderful photos. 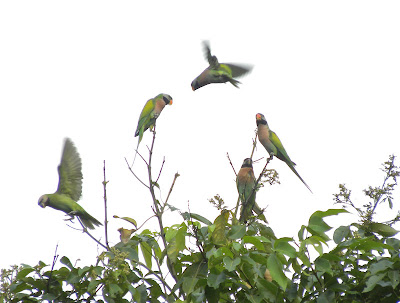 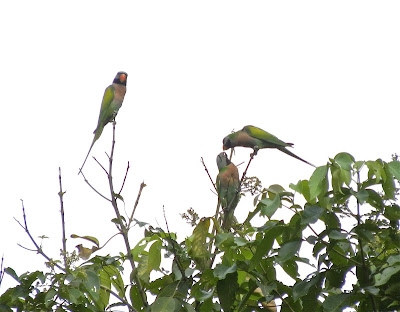 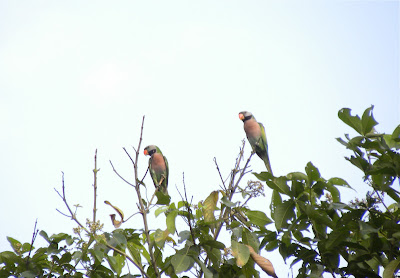 And there were the ubiquitous Pink-Necked Green Pigeons. And here they were having their evening supper of tree fruits. 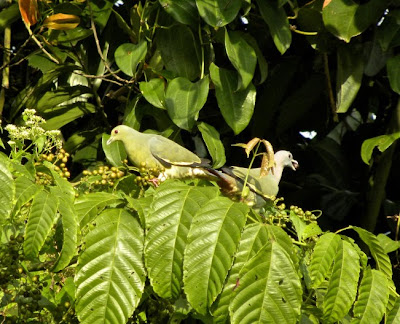 Here are some other birds seen at Seletar Reservoir and Sime Road.

Pacific Swallow (one that sat still!): 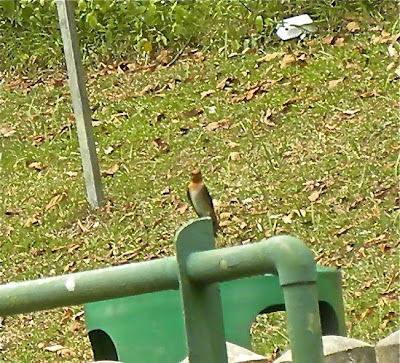 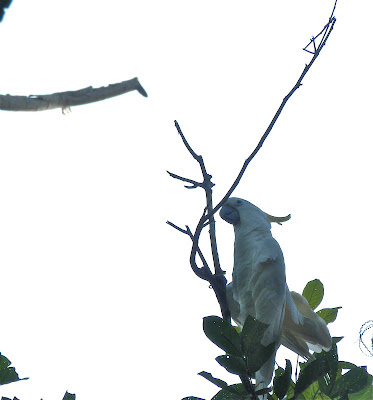 And last but not least an Olive-Backed Woodpecker: 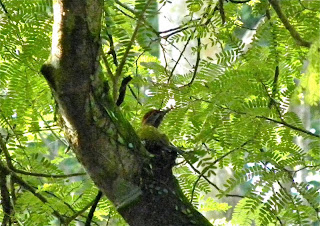