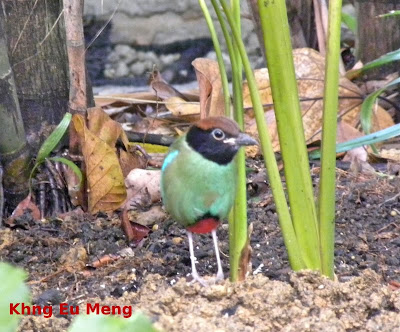 THIS little and colourful bird, a migrant in Singapore, has interested me to no end, largely because it is quite an elusive creature and hard to photograph if one doesn't have alot of patience.
This morning, I had gone back to the Singapore Botanic Gardens and try my luck again. The Hooded Pitta I saw two weeks ago wasn't to be seen any where at its usual spot. But I remembered being told by a fellow birder that there is another one a stone's throw away. Heading there, I was attracted to a photographer who was already in position and he advised that the bird was indeed around but had gone somewhere when the gardener came to water the plants. We waited for a short while and it did appear. I was pleasantly surprised to find it some what less afraid of people and went about looking for breakfast while we happily clicked away. More photographs of the bird are found below, but first, some information about it.
Physical characteristics: Hooded pittas have a black head, thin throat, and bill; dark greenish upperparts and wings; light wing bands; dark green underparts; black flight feathers; a black tail with blue-green tips and red underneath; black belly patch and lower belly; and pale brown to pinkish feet. Females are slightly duller than males. Adults are 6.3 to 7.5 inches (16 to 19 centimeters) long and weigh between 1.6 and 2.5 ounces (42 and 70 grams).
Geographic range: Hooded pittas are found throughout Southeast Asia, from the foothills of the Himalayas to Indonesia, the Philippines, and New Guinea.
Habitat: Hooded pittas inhabit forested and wooded areas including primary rainforests, secondary forests, bamboo forests, scrublands, overgrown plantations, and cultivated areas. They are found from sea level to 4,900 feet (1,500 meters).

Diet: Their diet consists mostly of insects, beetles, ants, termites, cockroaches, bugs, various larvae (LAR-vee), earthworms, snails, and berries. They hop quickly along the ground among dead leaves in search of food, and often feed in pairs about 16 to 64 feet (5 to 30 meters) apart.

Behavior and reproduction: Hooded pittas are strong fliers that are found alone or in pairs. When alarmed, or in order to distract other birds, they display such features as bowing, head-bobbing, wing flicking, and wing/tail fanning. They breed from February to August. Their call varies depending on region, but generally is a double-noted fluty whistle like "whew-whew." The dome-shaped nests are usually on the ground, made of roots, leaves (often bamboo), rootlets, moss, and twigs. The inside is lined with finer material. A short path, made of twigs, usually leads up to the entrance. Females usually lay three or four eggs that are white with gray, brown, or dark purple spots. Both sexes share nest construction, incubation, and care of the young. The incubation period is fifteen to sixteen days. The fledgling period is about sixteen days. 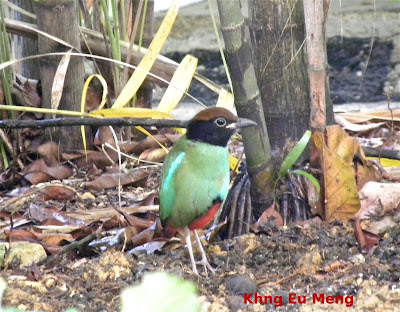 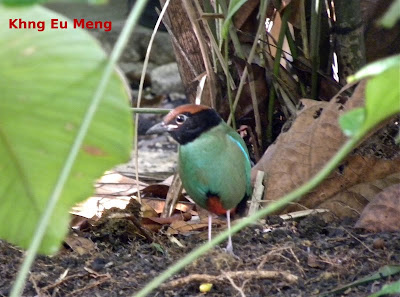 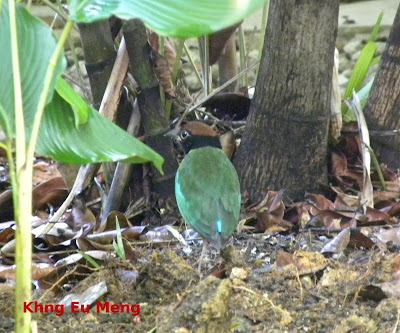 Such lovely creatures of God just at our door steps. Lightens the heart whenever we see so much variety and colour in nature. Thanks for sharing

Not bad pitta photo. The last time I saw the bird flying away from me

This bird flew into my house today. What should I do with it?